There was a range of events taking place across Sir Jonathan North Community College during Fairtrade fortnight, including the selling of Fairtrade snacks on the stall, making homemade goodies with Fairtrade ingredients to sell at lunch time, attending a Roots and Shoots Award Ceremony, running Fairtrade Assemblies, hosting Eco Events and delivering lessons on Fairtrade. At these events the Fairtrade Group continued to share information and leaflets about Fairtrade and its’ crucial campaigns to support workers’ rights and to stop exploitation of workers.

During Fairtrade Fortnight SJNCC ran Citizenship lesson on Fairtrade. This took place for all year 8 students in their Humanities lessons. This was designed to coincide with Fairtrade Fortnight and the theme ‘it’s time to put Fairtrade in your Break!’ This year’s event challenged students to try Fairtrade products on their break time – from chocolate bars and bananas to homemade goodies. The aim of the lesson was to deal with issues of ethical consumerism, the impact that students have in their role as customers and their choice of break time snacks at school that week. The outcomes of the lesson were, to know what is meant by the term ‘Fairtrade’ and to understand how your actions impact on other peoples’ lives.

To start, students were shown the Fairtrade symbol and were asked to discuss what it represents and if this is shown on a product what this means? From this discussion students were asked to write a definition of Fairtrade from their understanding and outline why it is important. For some students this generated curiosity and they raised questions. There was further mention of this later on in the lesson. 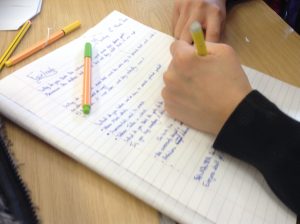 To further their understanding students were shown a video clip which was shared by the Fairtrade Foundation. The video shows students a group of customers buying produce from a new company at a reduced cost. It then goes on to show this company delivering the goods to customers’ doors and their reactions to the young children carrying their heavy deliveries. From this video clip, students were able to begin to question what their role as consumers is. Students were then asked to consider their own food which they plan to eat either for either break or lunch time and whether or not it is Fairtrade and the reasons why. Based on this class discussion students were then asked to consider the following questions:

During this lesson we looked at how Fairtrade benefits farmers through regular income, fair pay and working conditions, cleaner environments, new housing, improved health and sanitation and increased efficiency. Students were shown a case study video which offers a glimpse into the life of a tea farmer, Edson Maotchedwe. Students were shown the positive difference Fairtrade makes to Edson, his family and community and the challenges he faces in a poignant portrait of the everyday reality of life behind the tea we drink.

One of the main goals of this lesson was to consider the impact that they have as their role as a consumer and customer and how this can impact their future buying of snacks for break time. They examined the role of a banana worker, a plantation owner, shipper, shops and supermarkets. Based on the information that they were shown they were asked to estimate how much each person would earn out of 30p. This generated a discussion on the working conditions of each person and how wealth should be distributed. Students were shown how this 30p is split and asked to discuss whether they think this is fair or not. On reflection students were asked to consider the following: Why do you think the shops and supermarkets make the most money? Who do you think should have the most money? Students then had to give reasons for their opinion in order to justify their idea.

Lastly, students were told that Fairtrade products are usually more expensive than non-Fairtrade products and that this is to make sure that everyone is paid a good wage for the work they do. They were told that sometimes the Fairtrade Group has to persuade people to buy their products as the prices are higher than some of the food that the canteen sells. The plenary asks students to answer the following question ‘do you think it is worth the additional cost?’ on a cut out shaped as a banana. These were then displayed on a freestanding board in the main reception so that all visitors, teachers and students are able to see the answers. At the end of the lesson students were reminded about the range of Fairtrade products and homemade goodies which were on sale at break time and encouraged again to consider their role as a customer and consumer. 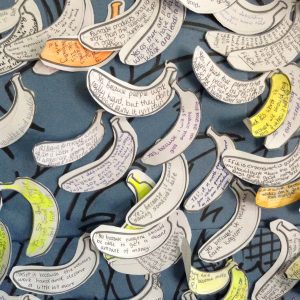 As part of this lesson students will have been involved in making a positive change to the world.

Their homework following this lesson is in two parts. Firstly, students were encouraged to motivate as many of their friends, family and teachers as they can to put Fairtrade in their break! The second part of their homework was to raise money for the Fairtrade Foundation themselves. Each student was equipped with an A4 envelope which they have were asked to collect penny coins in up until Friday 17 March and all of the money raised will be given to the Fairtrade Foundation. There will be a small Fairtrade gift for the highest fundraiser and a Fairtrade party for the class that raises the most money. This was a competition between all of the classes which we have named ‘The Penny War.’

We were aiming to encourage students to be positive and proactive in making a change to the world we live in. This structured the profile of, and demonstrated the importance of, being an active citizen of the world who is responsible for making small changes today which when combined with others will have a big impact on the future of tomorrow.