Walking 4 Wildlife and fundraising for out two nominated wildlife charities –  Helping Rhinos and Four Paws. Brian from Four Paws even came to visit and congratulate the girls! Well Done everyone! 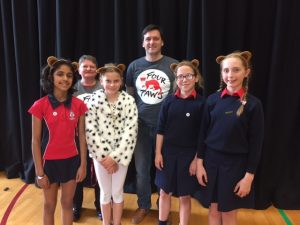 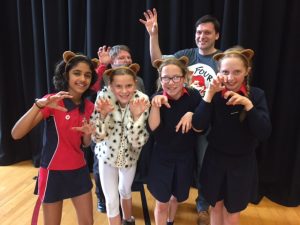 The thoughts of the girls about the day:

“My favourite part about the Guinness World Record Attempt was the fact that we got to dress up and see everyone else’s hats, T-shirts and clothing. We went to the school fields and paraded, walked, ran and flipped one and a half times round it. We had to do a kilometre but because some people cut corners, we did a bit more than a kilometre in total. I love animals and I think walking and supporting animals is a great way to show our appreciation towards them and dressing up and imitating them was lots of fun!

After our kilometre, we went into the hall and had a talk on animals from FOUR PAWS. FOUR PAWS is an international animal welfare charity that rescues animals that have been treated badly for many years, they are being brought to sanctuaries for their species to enjoy the rest of their lives more freely. My favourite story was a story about a bear called Lula and a lion called Simba. They were trying to be transported from Iraq but kept on being stopped at the border, they had to go back and forth twice and then had to wait nine days before they were let through. It was my favourite story because I loved how persistent FOUR PAWS were.”

“We walked 1 km for two charities. ‘Helping Rhinos’ and ‘Four Paws’. We did Walk for Wildlife in order for us to raise money. We all had to 5 jobs at home to earn £5 to raise money. Walk for wildlife is a world record attempt, so I was very excited to do it and I enjoyed wearing animal accessories! We also got to run over telly tubby hills! Which was really fun! I was dedicated to do this walk because I love animals and they do not deserve to be poached and chained.

After we did the tremendous walk, we got to hear a talk from the head of FOUR PAWS! It was very sad to hear that tigers had to live in cages and bears were chained up and could only walk one metre. The most interesting was that a lion and a bear were the only two animals left in a war-shattered zoo, FOUR PAWS soon came to the rescue! They had to negotiate with the police and zookeepers for 9 days, until they could take them! I was incredibly inspired by FOUR PAWS, as they dedicate and risk their lives to save and rescue animals.”

The 1km walk we did before you came and talked to us was very fun, many people were dressed up as a range of different animals, I was dressed up as a Dalmatian dog. Many people even crawled the 1km and many people were cheering them on. I am very glad that I had the chance to raise money for animals in need because I have animals and I would do anything to protect them.

When you came and gave us your talk, I was very inspired by it, the wonderful videos of the animals that you rescued , who are now living in a safe home, made me realise that we need to pay more attention to animals and help them, because they are just like us. I found the story about Lula and Simba particularly interesting, because even though the security did not let you leave the country, you never gave up. I have been inspired to encourage people to help animals even if it’s a tiny animal and if I can to help animals if they have lost their habitat or their parents.