If we want to end the illegal wildlife trade, we need to change attitudes and motivate people to make informed choices that don’t threaten biodiversity.

That’s the aim of Wild for Life, a campaign started in 2016 by UN Environment, and Tara is in Prague to represent Roots & Shoots at the opening of the new Wild For Life exhibition at Vaclav Havel Prague airport. 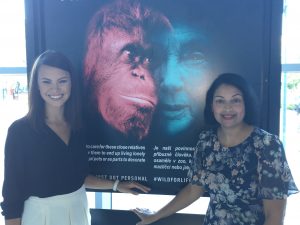 Wild for Life  is UN Environment’s most successful digital campaign ever, reaching over 1 billion people, generating 4.5 million social media reactions, engaging 35 celebrity voices, inspiring 15,000 pledges to take action and winner of numerous awards. It has already been exhibited at Beijing airport, significantly contributing to awareness and public mobilization through pledge-making.

As part of the campaign, people can choose a kindred species, morph their face onto an image of the species and share on social media. At the exhibition, such images will appear from Yaya Touré, Gisele Bundchen, Ian Somerhalder, Jane Goodall, Monika Leova and the football star Neymar Jr, among others.

Airports are great places to reach people. Thousands of people from all around the world pass through every day, so there is a huge opportunity to reach many many people.

People in power coming together to help the environment

Tara will be joining the Deputy Executive Director of UN Environment, Czech Minister of the Environment Richard Brabec, and Monika Leova who was crowned Czech Miss Earth in 2013 and is an ardent supporter of the campaign. 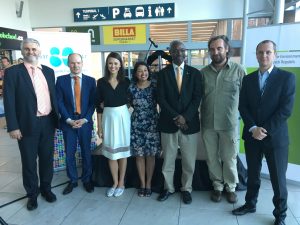 Also present will be the Director of Dvur Kralove Zoo Dr P Rabas, and Mr J Stejskal who is Director of Communication and International Projects at the zoo. The Zoo has worked hard to help conserve Northern black and white rhinos in Kenya and Tanzania, including reintroduction programs, and cutting the horns of rhinos to protect them from poachers.

It’s sad that this has to be done to protect these animals from being harmed or killed, but if we change the attitudes of those who desire the horns, then demand will disappear and the poachers will have no reason to hunt for it.

Find out more and get involved!

Why not try making a poster yourself using the website and sharing this with your school, or on social media?