“I hate hearing that ‘We’ve borrowed the Earth from our children’; I hate it because it’s a lie. We’ve not ‘borrowed’, we have been stealing, and we’ve made so many mistakes and it’s not the young peoples’ job to put it right. We have to work with them to fix it… we’re holding your hand so that together we can make it better.”

Dr Jane Goodall’s words from March’s Roots & Shoots Awards ceremony rang in my head as I entered the regal surroundings of Windsor Castle; where Roots & Shoots Annual Summit was taking place for a fourth consecutive year. 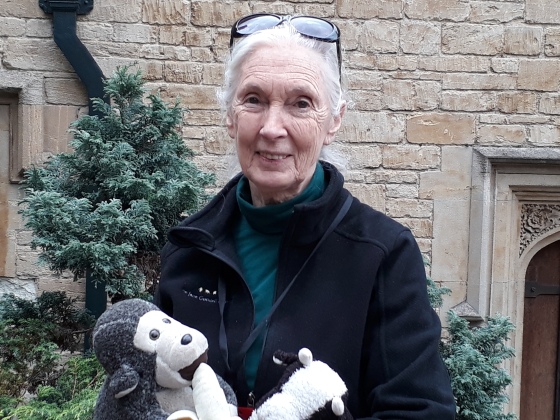 Roots & Shoots is a youth-driven initiative to assist young people in setting up and working together on self-chosen projects centred around people, animals and the environment. Its success speaks for itself, with at least 100,000 active groups of all ages initiating projects all over the world!

Knowing the difference in ages between the recipients of the Roots & Shoots Awards (largely projects created by primary and secondary schools) and the global delegates at the Annual Summit (most around university age), I wondered how much Jane’s sentiment or optimism would change around those more aware of the momentous tasks that lie ahead. The truthful answer? It didn’t change a bit!

Before watching presentations by delegates from 22 different countries (of the 100 that Roots & Shoots programmes are now present in – a milestone met three weeks ago!), I had the opportunity to sit down with Dr Jane and find out more. Easing into the afternoon of the fifth and final day of the summit – which Jane admits is one of the busiest weeks of her calendar – we sit in an impressive lounge room in George’s Hall over tea and take all things Roots & Shoots and the future…

What is the inspiration behind Roots & Shoots?

Dr Jane Goodall: I was learning all about the problems facing the planet and as I was travelling around raising awareness about the chimps and the problems in Africa I was meeting so many young people who were either depressed, or angry, or just apathetic. And when I talked to them, they more or less said the same thing: ‘we feel this way because you’ve compromised our future and there’s nothing we can do about it’. And of course we have compromised their future, but I think there’s something we can do.

So it all began with 12 secondary school students in Dar es Salaam from nine schools in 1991 – and they wanted me to fix all the problems that were around, but I said: “No I can’t, I’m not Tanzanian, but go and get your friends who feel the same [and] we’ll have a meeting” and from that the programme was born, with its main message: ‘every individual matters, has a role to play, and makes a difference every day.’

Do you still find that those who are secondary school-age [often considered ‘the golden age’ before you lose teenagers to apathy and distraction] are still involved now?

Oh, that’s my key target audience, because you get them just before they go away – ok some go to university, but a lot won’t – so it’s your last chance to actually catch them while they’re in one place.

How would you encourage children to think of their impact on the environment?

Tell them to join Roots & Shoots! Seriously! And then, it depends how old the child is, but for older children — then you start asking questions… I’m going to eat a certain kind of food; “ok, did it harm the environment when it was made? Did it involve cruelty to animals, like in intensive farms? Is it cheap because there was child slave labour?” What do you wear is the same thing: “How was it made? Where did it come from?” And then think about the effect that all these little choices have.

I know so many parents who say: “of course I recycle, my children make me!”. Some kids will literally read every ingredient on a label to see what’s in it — and if it has something in it that’s bad, like palm oil, they won’t let their parents buy it. And if you put millions of those kinds of ethical choices together, you move towards a better world.

How do the projects differ across the globe?

Well, in some places they live near the ocean – so they tend to do projects like, they’re especially worried about plastic bags, or maybe they want to help turtles guard their nesting sites and watch while the little ones go back into the ocean when the eggs hatch. Sometimes they’re groups living in the Amazonia jungle, and then they’ll do something perhaps to help whatever kind of endangered primate lives there. Everywhere they’re doing tree planting, everywhere they’re collecting garbage, trying to clean up the world.

It really just depends – like in Asia there’s a lot of concern about the palm oil plantations, but that’s spilled across, because we need to find out which products have palm oil in them, so that we can avoid them, and in order for that to happen you have to persuade the government to enforce labelling. So there’s huge projects in America and Australia to get the government to insist that products have labels saying what’s in them.

Are there any specific aims or goals for Roots & Shoots for the year ahead?

Just going on growing, and also working on global campaigns so that the kids can feel really involved with each other. Recycling cell phones or planting trees can be a global campaign… where they can network on social media.

What is your favourite part of working on the Roots & Shoots programme?

The enthusiasm and energy of young people once they know the problems and you empower them to take action. They’re just imaginative and filled with energy – and so excited about what they do.

https://soundcloud.com/kate-snowdon/dr-jane-goodall-interview
Listen to an extract of my interview with Dr Jane Goodall here and learn how recycling old mobile phones can reduce the need to mine for coltan, which can have devastating effects on gorilla habitats, and the children forced to mine for coltan.

Interview conducted on behalf of National Geographic Kids Magazine – keep an eye out for the rest of the interview in future issues of the magazine.

All of our activities are free but you can help to support the work of Roots & Shoots in the UK by making a one-off or regular donation.