The Roots & Shoots Club at ACS Cobham Middle School has had a very busy school year, and with a relatively small group, have accomplished a tremendous amount. When we returned to school in August 2016, our Science department expressed concern to us about the state of the natural pond on our campus. So we decided to    apply for an Artists in Residence grant from the school, and were able to have a pond expert visit us for a pond dip and to give his recommendations for ongoing maintenance of the area. Due to the proximity of the surrounding trees, he told us that there were too many nutrients in the pond from fallen leaves, and this was causing an overgrowth of aquatic plants. Over the winter we raked the area around our pond dipping platform, and also were able to plant some small trees, such as the dog rose, that will attract wildlife and pollinators in future. Over the Spring we continued with the raking before the Middle School’s pond-dipping lessons in May, and also to spent some time watching wildlife in our hide. 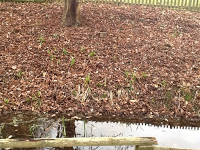 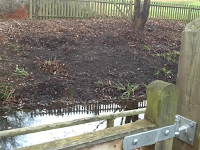 Our next Roots & Shoots activity was attending the Roots & Shoots Awards at the prestigious Barbican Centre in London. This was the second year in a row that we were able to attend this inspiring event. When we arrived, we walked straight into an extremely engaging Roots & Shoots information fair. All twelve schools that had won awards this year had an information table with displays about their environmental initiatives over the year. We saw anything from a school developing its own kitchen garden to a bottle recycling project that not only raised awareness about the level of plastics being thrown away at the school, but also helped build wells in India, to a group raising awareness about fair trade—and this doesn’t even include the amazing live music, too! In my opinion, one of the most useful parts of the day is the networking with other schools and this was certainly done. After this we had a lovely lunch in the Barbican conservatory, heard an uplifting presentation by Dr. Jane Goodall and watched some amazing nature films by Love Nature on the big screen in the auditorium at the conservatory. All in all, it was a day I’ll never forget and a privilege to take be able to take my students again this year. 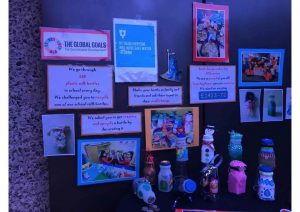 Over the winter months when we weren’t able to get outside as much, we looked around our campus and liaised with our Facilities department to find some ideas of what we could do to raise environmental awareness on campus. We realised that the recycling bins in our Dining Hall could be better labelled and so called a meeting with the school and our waste management company. As a group we developed a plan of action with our Principal, Robert Crowther, and the Middle School Student Council. We helped devise a simple recycling campaign to raise awareness about the importance of dividing organic and non-organic waste and to this end ran a video and text announcements to our Middle School. Our goal was to raise the amount we are recycling by another ten percent (from 35-45%). We also have made arrangements for our waste management company to come to the school in August or September so that they can do some presentations and we can see first hand the lifecycle of our waste when it leaves the school. We are now also being copied on the school’s monthly waste report, so that we can closely monitor any changes, and are going to publish an audit to the school community.

Finally, the team members ran an information booth at ACS Cobham’s 13th annual Party for the Planet. The ethos of the “party” fits in well with Roots & Shoots philosophy as it’s a community event with an environmental focus. We continued to sell gift cards of indigenous British animals (made by our talented Middle School artists) and were very fortunate to raise enough money to sponsor another chimpanzee from Jane Goodall’s sanctuary in Tanzania. We really hope that we will make a big difference to Kudia’s life and that this “adoption” will help raise awareness of our efforts in Middle School.

“Being involved with Roots & Shoots has changed my life as an educator. I think that when you put at the forefront of your teaching the human connection to others that’s inherent in the day-to-day choices that we make—including our relationships with the Earth and other fellow living things—you can truly rise above “subjects” per se and begin to create human beings with a conscience who want the best for our world.” 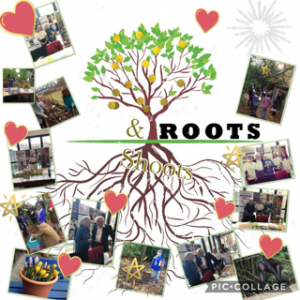