Dr. Goodall established Jane Goodall’s Roots & Shoots Day of Peace in 2004 to encourage Roots & Shoots members and other interested individuals to promote peace in their communities and around the globe.  Members craft Giant Peace Dove Puppets from reused materials and fly the Doves in their communities to symbolize their commitment to peace. In past years, Giant Peace Dove Puppets have flown in almost 100 countries in city parks, backyards, convention centers and even refugee camps. Held high by young hands, the Doves have spread their wings everywhere including the Coliseum in Rome, a monastery in Mongolia, the base of Mount Fuji and even the peak of Mount Kilimanjaro.

“With so many challenges in the world today that stem from war and more recently terrorism, it is even more imperative that young people channel their energies towards positive activities that highlight the importance of peace and give them a sense of unity and collaboration in our society, as well as hope for the next generations” said Tara Golshan (Executive Director, Education).

Students, teachers and volunteers spent the morning assembling the Dove, it was a true testament of Team Effort! Jasmina Georgovska from the Roots & Shoots UK office team, said “I’ve had so much fun at Chowbent! The excitement and dedication of everyone that took part in the Peace Day celebration that day filled me up with hope! Seeing all these young people pledging to create a better future was so inspiring!”

Students flew the beautiful white big Peace Dove and created wonderful Peace Day mini Doves. Many powerful and inspiring pledges were written on the white sheets used to make the dove. Here are some of them:

Amelia: “I promise never to do less than my best for the planet”

Holly: “ I will make people smile because the world need happiness”

Bobbi: “I will always be kind to animals and humans”

Kirsty: “ I will be kind to others who are kind to me”

Kelsey: “ will always stay strong and have faith in the work we do at school”

William: “ I will plant lots more trees to replace the ones people have cut down”

Harvey: “ I promise to work towards stopping extinction”

Leah: “ I promise to keep the world clean and tidy”

“The Peace Day celebration at Chowbent Primary School was an amazing experience. Our journey started 5yrs ago thanks to a lady called Melanie, who introduced us to Roots & Shoots and the UK team, and we never looked back. It all started when we entered a competition for most improved school ground, we got a Roots & Shoots Silver Award and were invited to one of the Roots & Shoots celebrations in London.

And then we wanted to do more and more, so we formed a larger Eco committee of about 12 pupils and we transformed the school grounds. I then had a crazy idea that with the help of the kids and their parents and grandparents we will build a greenhouse out of recycled pop bottles. It was so much fun, and our green house is beautiful. 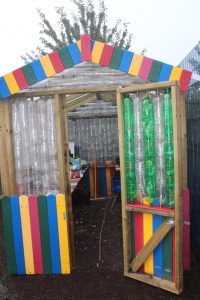 Earlier this year, I got a phone call from the Roots & Shoots UK team, asking if we would like to host the Peace Day celebration this year. We of course, jumped at the chance for the school to get involved, and we all truly worked together to make that day very special. I rallied round my friends and work colleagues and it all came together on the 19th of September and it was wonderful to see the school doing it together: from reception students all the way to y6 class every class in ks1 was making little doves out of paper plates, ks2 were involved in making the large dove made out sheets sown together. All the pupils in ks2 wrote pledges on the wings which was really nice to see and with some of the pledges we could see the day meant something different to every child here.

But personally, I cannot thank Roots & Shoots enough for giving our school the chance to make a difference and we all are more than happy being involved in this programme.“

“International Peace Day was a wonderful opportunity to focus everybody at Chowbent on thinking both about the world as it is today as well as the world we would wish to create for the future. Working as a team the children created a large peace dove onto which they wrote their own individual pledges. Each pledge outlined one step that each person would make in order to help make the world a better place to live. The day beautifully complemented the work that we have undertaken over the last few years to promote an awareness of ecology, care for the world and more importantly, the need for every member of the school to stand up and take a personal responsibility for themselves, their community and the world.

We were pleased to be joined by Jasmina from Roots & Shoots on the day, and to hear a recorded personal message from Jane Goodhall herself.

The impact of the day can be summed up in one pledge written on our peace dove by a child in Year 4 who wanted to write on the dove, ‘I will never forget this beautiful bird, because it is special”. 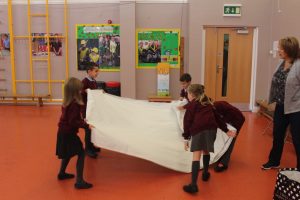 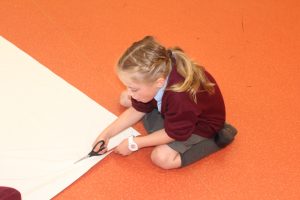 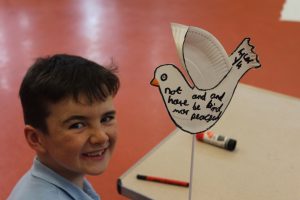 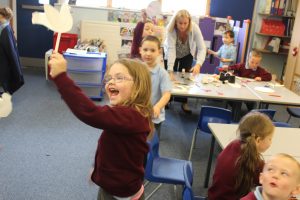 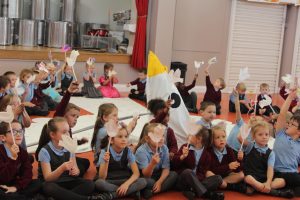 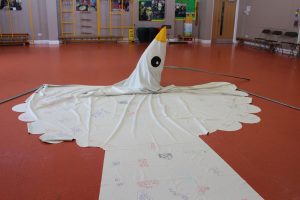 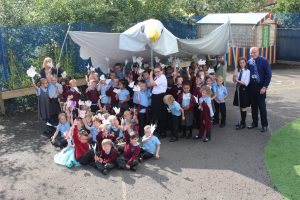 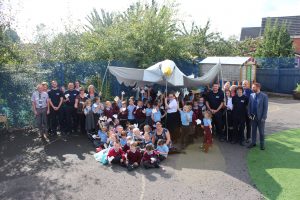 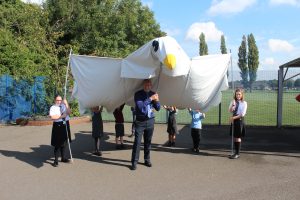