On Sunday, I went to see Jane Goodall at the Old Vic theatre. JAPS girls had already seen the Lorax there, so I was familiar with my surroundings. I had seen Jane Goodall thrice before; at the JAPS assembly, at the JAGS talk and I was one of the few very lucky girls to have lunch with her at Windsor Castle. Yet every time I see her, she surprises me with her dedication to animals. I went with my friend Zara. On arrival, we went downstairs to meet a whole table of activists. Miss Raimes was there with her friend. Also, there was a lady, who had set up a sanctuary for dogs across the world, in Borneo and all across Asia. But it’s not just dogs she harbors, she has set up an elephant orphanage in India. I think her work is inspirational. She has also taken in a lovely energetic, caring dog. Also present were these two musicians, who sang songs about nature and were part of a band that spread news on global warming. Later, we met Tilly who introduced the brilliant idea of no waste November. When we got into the Old Vic all the Lorax props were left over, so it set the scene fantastically. The talk was the same story we had all heard, yet the way she told it…It was magical. After the talk, I met Jasmina, Jane Goodall’s deputy for the UK. She chatted a bit, signed some books and gave some hugs. Meeting Jane Goodall always thrills me – she is just so inspiring. I am not the only one she has inspired, everybody I saw at that table, everybody in the theatre, everybody who believes in themselves, were also inspired. 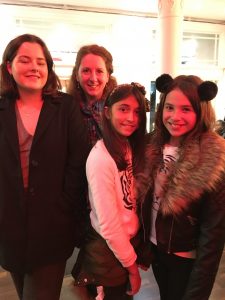 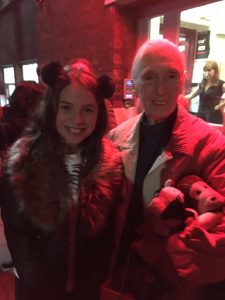