On Sunday October 15th, University of Bristol Roots & Shoots and Ape Alliance teamed up to run a retro cinema extravaganza – a pedal-powered electric bike ‘outdoor’ showing of King Kong (1976). Thanks to Clifton High School, we had a stunning marquee under which volunteers cycled their way to a fun-filled evening. We kicked off the evening with an introduction from Dr Ben Garrod, primatologist and broadcaster, who spoke about the controversial history of apes in film and how this event will support the important work to end the ape trade. The showing of a short film by Lindsey Parietti demonstrated the work of the Liberia Chimp Rescue Project, the charity which Bristol Roots & Shoots supports.

A short cute orangutan puppetry act and free popcorn help set the mood, while The Clifton Sausage were on site with hot dogs (including veggie and gluten free options!) to keep guests fuelled as they collaboratively cycled 20 bikes, provided by Electric Pedals, to power the movie.

At the end of the night we held a charity raffle with prizes that included goodies from The Lido, ape-themed artwork, The Clifton Sausage, Boston Tea Party and more.

Overall, ‘King Kong in Clifton’ raised an amazing £733.69! The total will be split between Bristol Roots & Shoot’s chosen charity which save orphaned chimpanzees in Liberia, and the endeavours of Ape Alliance – a coalition of over 90 ape conservation organisations worldwide.

Many thanks to The Clifton Sausage, Electric Pedals, and Clifton High School for their support. 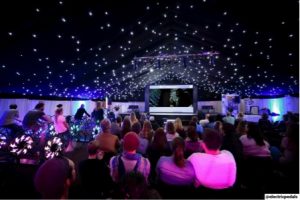