Two students in our Fourth Grade (Year 5) decided to take positive action to help a charity they had learned about from an older sibling of one of the girls. Hope for Paws is a caring charity that rescues dogs and sometimes cats, rabbits, and donkeys! Eldad Hagar runs this charity, and he posts all of his rescues on You Tube to share with the world on how important it is to care for animals that already exist and need a loving home. Eldad hand holds his camera, so you feel like you are on the rescue with him. He has a small team of people who volunteer to work with him. Hope for Paws has helped change the lives, for the better, of hundreds of animals.

The girls wrote a letter to their Head of Lower School asking permission to have a bake sale at lunch to raise money for Hope for Paws. They also had to file a request with the office, which accepts who can do fundraising at school. The girls met with Ms. Gediman, who heads the Roots & Shoots program and she was thrilled to hear what they were doing.

To inform the whole Lower School, the girls prepared and presented at assembly. They showed a Hope for Paws video, which helped the other students learn about the wonderful work that Hope for Paws does.

In the end, the girls were able to organise a Rags and Tags day at school, where the students came to school out of uniform. Each Lower School child paid £1 for this privilege. All of the money will go to Hope for Paws. The girls also organised a bake sale to raise more money. In total, the girls raised £292!

It is incredible what two 9 year old girls can do to make a positive change when they put their minds to it!! 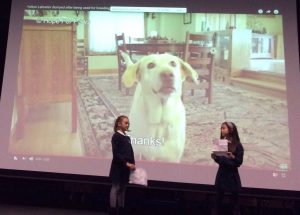 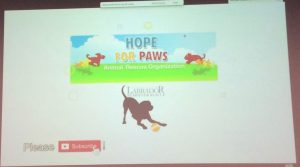 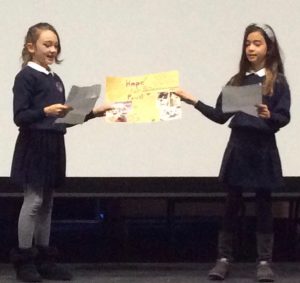