It was 11 months ago that Natasha Woest designed and launched a website for the animal rescue in Mutare, Zimbabwe with an aim to educate, raise their profile and funds.  Together with the team on the ground, they created an online donation platform and linked the two.

We are so excited to share an update from this project. 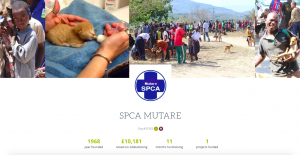 Included in this amount is £1162 for a neutering and vaccinating campaign but read on to find out more exciting news….

You understand, we write a project, (heart in our mouths), we cross our fingers, and then we press Send, and we wait…

It was the most reassuring feeling when we got a very generous first response. Then another, and another. Very quickly, we attained our dream….and we could get out into the bush and start vaccinating dogs….which I spoke of before.

Then we were very excited to get together another roadtrip, but we were stopped in our tracks when we could not buy any vaccine in the country. It was a helpless feeling.

We have recently managed to get more, so please know we are desperate to get on the road, but we have some important commitments that will prevent us getting away till 24 March. We are packed up and ready to go, so please know, (those fine donors who fulfilled our dream) that we are eager to do our side of the deal. A huge debt of gratitude is due to one particular family, from NYC, who funded almost the entire project themselves. But we are thankful to you all. You have made one group of volunteers delighted and motivated.

Although, whilst we are not out vaccinating, we have been busy……

Towards the end of last year, say early November, it was hard to look ahead, to read that opaque ‘crystal ball’, and to plan the future, (in our case, the future of SPCA Mutare). Our governing regime, a greedy dictatorship, had lost the plot, and had forgotten that base principle that they were employed by the people, for the people.

On the contrary. The Peoples’ money was their personal wallet. You put your fundraising or salary into your bank and it mysteriously disappeared into the ether, and you could not access your own funds. Well, you could retrieve some, but at about $20 or $30 per day, after queueing for 2 hours, and then in coins not notes. We were paid in US$, and were given from the bank a fanciful unbacked currency called Bond Notes. The ultimate crypt-o-currency?

Cash machines were closed completely. You endeavoured to survive that same ethereal monetary illusion, just as Grace and Robert Mugabe and their close allies and families lived on our hard won gains as if they had the budget of Bill Gates, The Donald or the Queen of England. What a sad oxymoron.

Let us make no mistake. Zimbabwe should not be a poor country. We may not have oil, the lifeblood of rich African countries, but we do have the biggest diamond fields discovered in the world in recent times, Platinum and other valuable minerals, fertile soils, and we have wilderness the value of which is beyond priceless. While oil may fuel the world, diamonds seem to be as critical to the rich perhaps to advertise their richness, and we are happy to oblige. But the diamonds are tainted with a sinister provenance, as they propped up this sad situation, with a Dictator in Robert Mugabe and a wife whose avarice was relentless and where, with their enormous wealth, grinding poverty was his true legacy for the poor majority. Our once flourishing economy failed. Majority, use your vote, you say? Well, thanks to external assistance, our election ballots are already cast long before they are even held. So now a hovering China steps into the ring. Shylock-style, the promises and offers come with wicked and devastating clauses, and our entrenched way of life is warped and re-invented.

They take our hardwood forests, they alter our soft footprint nature game parks, they build an abattoir for donkey fat and skin, they get allocated farms and diamond fields, they offer the poor nominal sums for young dogs, tortoises and other wildlife (to eat) and perhaps worst of all, they are paying paupers to bring them pangolins, now considered one of the worlds most endangered animals, for perceived medicinal ingredients. Pangolins are already thin on the ground, but it seems that is not an issue. We need an army to police just this cruelty.

As an animal rescue centre, we have felt these issues at a heart and spirit level. You all know how we have struggled just to be there for the domestic and livestock animals. We have chosen to not give up. So added to our usual concerns, we are looking at whether or not we can halt the Donkey abattoir and have thrown our support in with other animal rescue centres to do this. But as an extension of this, we are working on a strategy to create a donkey sanctuary. It’s in very early stages, and it’s geographically a challenge as donkeys are used more in the South of Zimbabwe. We already do our very best to educate against cruelty. There is a tendency for owners to clip, cut or break the ears of donkeys as a means of identification. Also, hard wooden yokes are common, and we encourage the use of strap yokes where we can. The final problem we encounter is the heavy loading and mistreatment in the driving of a donkey team. We may be a blade of grass in a savanna, but to do nothing would be criminal. When we go to rural regions, we stop at every donkey drawn cart, for a quiet chat and to hand out some educational leaflets.

The other tragedy that runs in any African’s very DNA is the demand, again from China, for our baby elephants. These babies are kidnapped from wild elephants, from the matriarchal families, (mostly in Hwange National Park,) and there must exist a collective mourning in the elephant herds. It’s generally accepted elephants do indeed grieve in their own way. To us, it seems as if many of the historical and diverse rules, laws and ‘gentlemens agreements’ for relocation of wild animals for commercial reasons have been ignored. But it seems to me that translocation of African wildlife to zoos in China in this day and age, feels particularly tragic.

So is the situation hopeless? Absolutely not. WE have a new President in Mr Emerson Mnangagwa. We have renewed hope. And we wait and see. Will the people be heard?

Animal Welfare Charities should have no interest or need for involvement in politics. But when lives and economies are destroyed, it’s in your face.

Let’s see how we do. What is sure, is that we will be active and vocal for ALL animals in our country. No more elephants to the Far East. No more Tortoises and Pangolins to China AND when the countrymen of China come to harvest opportunities in our Zimbabwe, we expect them to respect the zeitgeist, the status quo, the spirit of our traditions, and our laws especially and they may not eat our dogs and cats.

AS far as the SPCA itself is doing, you can imagine our shock when recently a herd of 15 goats were mustered to the SPCA Mutare. Imagine Magic the goat, delighted at all the pretty maids all in a row. He stood tall, legs akimbo, and he could not have curled back his lips further as he tasted the air for available opportunities, and let me tell you, he has taken FULL advantage of this stroke of good fortune! For him, not us! We have very little in the way of fodder, so much has had to be gathered off site. The legalities involved when it comes to livestock are complex and immutable, so we had to hold onto them waiting for the owner to come and claim them….in vain. Time has come to curb Magic’s joys and delights, (but we are sending a few off with a busy future as new mums) and we are looking for a new home. We have a possibility at a smallholding, so hold thumbs.

We have had innumerable cats and kittens surrendered. It’s easier to make the problems of irresponsible breeding someone else’s – ours. It’s difficult enough for us to find homes. But we love all our animals and fight for them to attract new owners. Our Facebook page is a real treasure in this regard. We are still trying to improve the City By Laws, to curb uncontrolled breeding. We found some lovely homes for the 2 Labradors and 1 mixed breed just outside Harare on a 100 acre plot. Our little scruff, SweetiePie, was homed with one of our volunteers, and she is taking her role as Monkey Chaser very seriously. The big red German Shepherd is waiting to be collected by his new owner. In all, a good month. A pure white, blue eyed pup and his protective mother are off to live in Chimanimani, to help a shepherd with his sheep.

We have a good home for the tiniest kitten we have, a cross Siamese, and we are trying hard for all the others. We have given up trying to home Big Momma cat, an enormous Tabby who is quiet and mature, and she helps the kittens and wilder cats to settle down and gain confidence as she shows them the ropes. She has the freedom of the SPCA, and we are pleased to have her on the team of volunteers.

Lastly, we are in the end stage of plans for our next rabies campaign, in March, and which will likely be a bit closer to home, as we follow the Rabies outbreaks. We have our next AGM coming up, and we are hoping for a few new volunteers to come on board. So, if you are near, please come and join us for both of these. For the Rabies Days we need people to write up certificates, so you will get to meet (and name) about 600 dogs! See you there