Students from ACS Cobham International School, aged six to 18, enjoyed a visit from Dr. Jane Goodall, one of the world’s most famous conservationists and scientists. 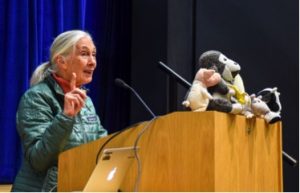 Internationally recognised for her environmental work and continued research into wild chimpanzees, Jane Goodall, PhD, DBE Founder – the Jane Goodall Institute & UN Messenger of Peace gave a presentation to ACS Cobham students about her conservation projects and the educational programme Roots & Shoots, which she formed in 1991.

Roots & Shoots aims to encourage children to implement practical, positive change for people, animals, and the environment. As part of the visit, Cobham middle school students, who have been working on a number of activities as part of the Roots & Shoots programme, presented their work to Jane, who commented:

“It was wonderful to meet so many committed young people from so many countries yesterday at ACS Cobham. An international school such as ACS is a wonderful launchpad to enlarge our Roots & Shoots programme. Roots & Shoots seeks to empower young people of all ages to become involved in hands-on projects for the community for animals and the environment we all share. I look forward to seeing the results of all their many Roots & Shoots projects – together we CAN make the world a better place.”

Following the lower school presentations, Jane gave a talk to grade nine and ten high school students, about her work with chimpanzees and conservation at the Gombe Centre in Tanzania. Former High School Roots & Shoots students also had the opportunity to interview Jane live on stage. 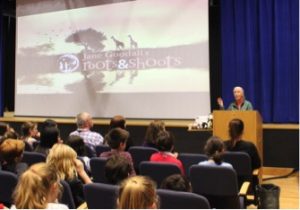 “I am very proud of all our young members and the staff at ACS. They are one of the longest standing schools on our programme here in the UK and a shining example of the type of commitment and dedication that will truly contribute to the preservation of our planet and its natural resources. I very much look forward to all their future endeavors which I’m sure will be both creative and impactful.”

ACS Cobham International School is part of the ACS International Schools group, serving both local and global families since 1975.  The school is non-sectarian, co-educational, with day and boarding, enrolling over 1,400 students aged 2 to18 years.  The campus is located in Surrey, to the south of central London, and within easy reach of Gatwick and Heathrow Airports.

The school offers a world-renowned curriculum including the International Baccalaureate (IB) Diploma Programme, a US High School Diploma, Advanced Placement (AP) courses and the new AP Capstone & International Diplomas. Academic success enables ACS graduates to attend the college of their choice, and many of the world’s finest universities.

The school has state-of-the-art facilities with impressive grounds and an on-going programme of investment, including the construction of a new Boarding House, which opened in 2017.  The strong core academics are supported by outstanding co- and extra-curricular opportunities across sports, the visual and performance arts, leadership, and giving.

As part of the transition to a charitable entity ACS adopted charitable aims to advance education in Sept 2018. In support of these aims ACS offers financially assisted places to student who otherwise would be unable to attend ACS schools.

Dr Jane Goodall, DBE is Founder of the Jane Goodall Institute and a UN Messenger of Peace – she is also the world’s best known female scientist. In 1960 Jane began the study into the wild chimpanzees in the forests of Gombe in what is now Tanzania. That research continues nearly 60 years later and we are still making new discoveries. The Jane Goodall Institute was founded in 1977 and there are now JGI offices in 33 counties.

In 1991 Jane Goodall formed Jane Goodall’s Roots & Shoots, a programme that empowers young people of all ages to undertake projects to benefit their local community, animals (including domestic animals) and for the environment we all share. Roots & Shoots is now active in nearly 100 countries.

TACARE a community-centred conservation and development programme was created in 1994 and partners with communities around Gombe to create sustainable livelihoods while promoting conservation goals.

Dr Goodall has received numerous awards and honorary degrees and these include France’s Order of the Legion d’Honneur, the Medal of Tanzania and Japan’s prestigious Kyoto Prize. In 2002 Jane was appointed to serve as a United Nations Messenger of Peace and in 2003 she was named a Dame of the British Empire. She is author of many books and has featured in many films and documentaries around the world.