The ocean is the largest ecosystem on earth and as such, it’s effectively earth’s life support system. It absorbs carbon dioxide from the atmosphere and reduces the impact of climate change, so the diversity and productivity of our oceans is crucial for human survival. But as we know, they’re in need of our attention, not just because of plastic pollution, but from rising ocean temperatures which are as a direct result of global warming.

At 1,400 miles long, the Great Barrier Reef off the coast of Queensland in north eastern Australia, is the biggest living thing on earth so much so that it’s visible from outer space – a fact that the children were amazed by. Home to countless species of colourful fish, molluscs and starfish, as well as turtles, dolphins and sharks, it comprises of thousands of reefs, and hundreds of islands made from over 600 types of hard, and soft coral. Warmer ocean temperatures puts stress on coral and leads to coral bleaching i.e. it dies along with the other organisms that live in coral reefs which is why I focussed this weeks’ workshop on coral reef conservation. Just under a third – 30% – of the coral perished there in 2016 and a further 20% in 2017 so even though these figures show a percentage decline, half of the Great Barrier Reef has died since 2016 which is alarming.

When chatting about rising sea temperatures, one little child told us how their mummy always checks the bath temperature before they get in it so that it’s not too hot, where upon I, along with another teacher, explained how the coral reef and fish in the ocean can’t make it colder so they become very distressed, or worst still, die. But…the good news is that we can all make a difference by saving energy. I asked them how we might do this and number of little voices shouted, ‘by turning the taps and lights off,’ when not in use. Wonderful.

Learning about sharks and why they’re endangered was interesting because some kids love them, others don’t, but nudibranchs, or sea slugs as they’re commonly called, appealed to all of them because they come in so many different crazy colours and shapes, and I knew the children would enjoy drawing them whilst we chatted about coral reef conservation. One little girl linked this to how her daddy puts forks in the slugs he finds in their back garden – because they’re upsetting his plants – and throws them over the fence. The neighbours must be so pleased; if only that Daddy knew… 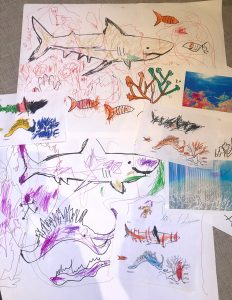 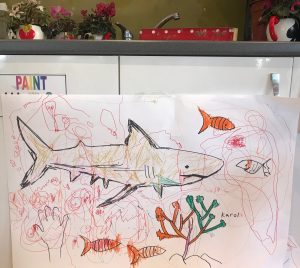