The average household in the UK produces more than a shocking tonne of waste every year. Put together, this comes to a total of 25 million tonnes per year (data from 2014)*, equivalent to the weight of three million double-decker buses, a queue of which would go around the world two. Four fifth of this amount is produced in England.

Less than half of this amount of waste is currently recycled. (In 2016 recycling rate for England was 44.9%, compared with 43.0% in Northern Ireland, 42.8% in Scotland and 57.3% in Wales)*. This amount needs to increase and we need to encourage our children to learn and practice recycling from a young age.

The 90 minute long visit started with some theory on “Reuse, Reduce, Recycle” in a very well equipped and cheerful education centre, run by an extremely well prepared lady, called Kirsty. First we were tested on our knowledge on what can go in the recycling bins and what can’t. It became clear then that different councils have different contracts and therefore different items are allowed in these bins. (More about this later).  After a couple of games we set up to visit the actual factory, which turned out to be a fascinating tour for children and adults alike. 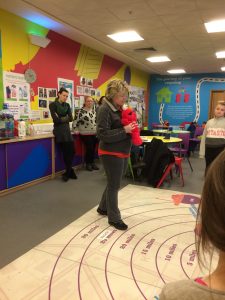 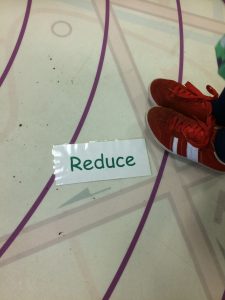 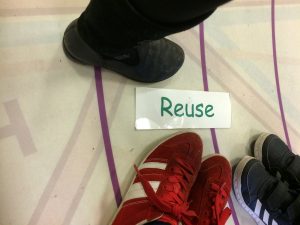 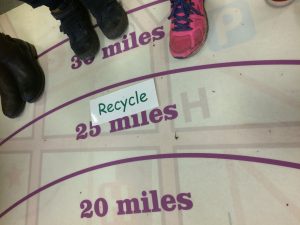 In the factory rubbish is selected manually and by machines too. There is a manual pre-selection where a team of six men discard anything that is dangerous or could break the machines or non-recyclable. We were told that the men can spend about 15 minutes besides the conveyor belt before becoming seasick. Then they swap to another one so they look at something else.

The machines that follow use different mechanisms to separate the waste. Some use physical barriers that help separating flat items such as paper and flattened plastic bottles from anything that is round like food cans and drink cans. Others use an infrared light that scans the items on the conveyor belt and can tell the difference between paper and non-paper. Non-paper items are then blown off by a jet of air. Yet another technique is using a magnet that pulls out metal from amongst everything else. There are altogether 15 machines for sorting and, in the end, for baling the different materials. These bales are then transported to the factories where the actual recycling takes place and where new objects are born from our waste.

The children had a fantastic time watching all these machines and men at work, spotting branded materials on the conveyor belts, trying on the men’s protective work outfit, and ultimately, understanding why recycling is so very important.

A final note on the non-recyclable rubbish. Children and adults visiting the centre arrived from two boroughs, The Wirral and Cheshire West and Chester (CWaC). It turned out that in The Wirral general waste and the not recyclable material is incinerated in a local factory where they create energy by burning the waste. In CWaC though, it seems, they are sending rubbish to the landfill. This sounds horrifying and we are planning several actions and activities with the children with regards to this. 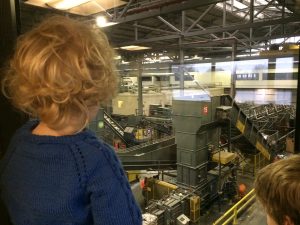 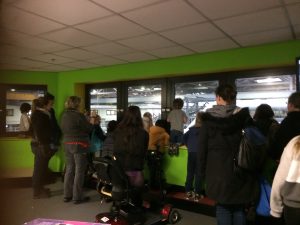 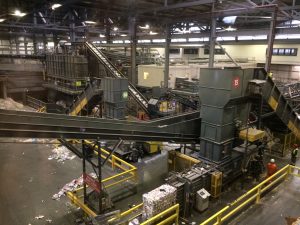 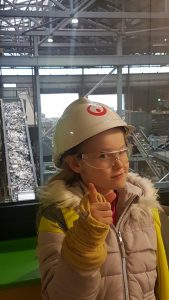