It’s a vast continent that pretty much everyone has heard of. It’s mostly snowy and white, it has penguins, and reaching the south pole at its centre is one of the big adventures that many explorers aim for.

But there’s a lot more to this fascinating continent than that!

Does anything live in Antarctica? 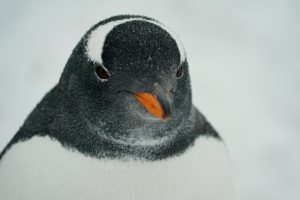 Yes! Lots of wildlife calls the vast, icy continent home. Although most people are familiar with pictures of ice sheets and icebergs and snowdrifts, there are rocky areas – particularly around the coastline. These areas are home to birds like various species of albatross, petrels, gulls and terns. The penguin is probably one of Antarctica’s most famous animals, and there are 8 species in total that live actually on Antarctica itself or one of its nearby surrounding islands. These include the Emperor Penguin, which is the only animal in Antarctica to breed there too.

There are 7 species of seal, including the mighty Elephant Seal and the fearsome Leopard Seal. The icy waters are also home to whales which roam throughout the oceans of the Southern Hemisphere: gargantuan Blue Whales are the biggest of these, growing up to 24 meters! It’s not just big animal though: there are plenty of little things too, like nematode worms and earthworms and a type of wingless midge. Moss, liverworts and lichens are the only type of plant life that can survive the extreme environments

Despite the challenging environment, there are often quite a few people on Antarctica. The vast majority of people are there during the Antarctic summer, when the days are longer and the temperature isn’t quite as horrifically cold – though it’s still VERY cold! 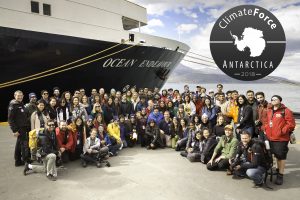 Some of them are adventurers and explorers, hoping to cross the continent or reach the South Pole, like the explorer Sir Robert Swan, or Roots & Shoots ambassador Erasto Njavike.   Others are scientists and researchers and the staff that help them at various base camps located around Antarctica, run by the Antarctic research teams from various countries.

The British Antarctic Survey has the Rothera and Halley IV stations. At Rothera during the summer, there can be 100 people at the base, while in the winter only 22 people are there to keep it running. Halley IV is actually located on the thick ice shelf off the coast of the mainland, and has a peak of 70 people during the summer and 14 in the winter.

Researchers at both stations, and others, work on things like observing Earth and space weather, the marine ecosystem around Antarctica, how the ice is responding to changing temperatures and more.

One of the types of research that happens at Antarctica is taking ice cores.   These are cylindrical tubes of ice that are cut from deep into the surface of Antarctica, and they’re kind of like time capsules.

This is because of the way the ice caps on Antarctica have formed. Snow has fallen there for thousands upon thousands of years, and as the layers build up, the snow lower down gets compressed together until it forms pure ice.   But as the snow falls through the atmosphere, it can pick up tiny particles of things like dust, pollen and also trap gasses in it.

So if you were to take out a core of ice that was very deep, and take a sample out of it, you could use it to get a snapshot of what the atmosphere on Earth was like at the time. The researchers are able to find out how old that ice is too, so they can put the things they find in a sample to a particular time.   Why is this important? Firstly, it gives us a direct measure of what Earth was like in the past, so we can see how it’s changed over time. Secondly, this information can help scientists improve their ways of predicting climate change, by seeing how things have changed in the past.   In Antarctica, those ice cores can reveal what the atmosphere was like 800,000 years ago! Imagine touching ice that fell as snow that long ago!

One thing you might be surprised to learn is that Antartica is a great place to find meteorites! This is for many reasons.   First, meteorites often have a blackened crust, caused by the rock melting in the high temperatures as it falls through our atmosphere. And of course with Antarctica mostly being covered in snow, the black shows up easily against the background.   Secondly, although it’s covered in snow, it’s actually very dry there: there’s very little water in liquid or gas form. Most meteorites are made from iron which can rust and erode away very quickly in wet environments. This doesn’t happen in dry places like Antarctica, so they last a lot longer.   Thirdly, since there’s very little plantlife, there’s little that would cover them over or hide them when they land.   Scientists who research meteorites can use them to find out about the history of our solar system, and what’s out there in space.

If you’d like to know more, check out the following sources: