It was International Polar Bear Day last Wednesday, 27th February, so my workshop focussed on the Arctic. Polar bears and walruses took centre stage, with reindeers chilling in the wings (excuse the pun) as they’re of least concern with the International Union for Conservation of Nature at the moment. This, however, may well change with the rapidity of global warming, particularly in the Arctic. The nursery had seized this auspicious date by decorating their interior with polar bear themed toys, books and imagery; and they’d even, very kindly, adopted a polar bear from WWF which the children have named Buzz – excellent.

The Arctic is warming two to three times faster than the rest of the world which is having huge knock on effects around the globe, so I wanted the little ones to understand a bit more about this. Unless we reduce greenhouse gases, we will all continue to feel the effects of the Arctic warming up. And, these are; rising sea levels, changes in climate and precipitation patterns and increasing severe weather conditions (wild fires, monsoons, floods etc). Loss of fish stocks, birds and marine mammals are also very sad, but very real indicators of global warming.

The children enjoyed sketching polar bears, walruses and reindeers with me and were amazed when I told them that polar bears are twice the size of a Siberian tiger, as tall if not taller than the building we were in, and the largest land carnivores on earth. I also explained that should they ever come across one, it’d probably be best not to stroke it. You might be thinking that this is an unlikely scenario, but perhaps that’s what the villagers of Novaya Zemlya, Russia, thought before more than 50 polar bears strolled into their quiet village earlier this month scavenging for food. This is because fish and seal stocks are depleting so quickly in the north pole due to climate change, they’re starving.

After our chat, the children told me that we could help the polar bears ‘by saving energy’. Brilliant, I thought. We have talked about this subject in the past, but the little ones who answered on Wednesday were not the same ones who have shouted out, ‘turning the taps off and lights off,’ before. So, they most certainly are taking it in! I later added that travelling to places by foot, or trialling their scooters or bikes, rather than driving where possible, would help too. For more info please visit: www.doodleswithmydaughter.co.uk 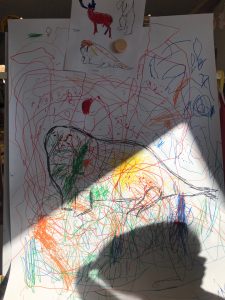 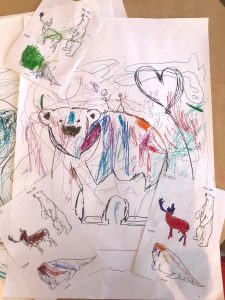 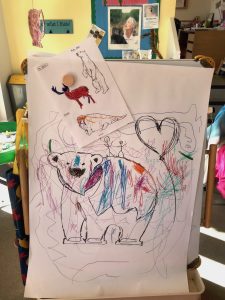 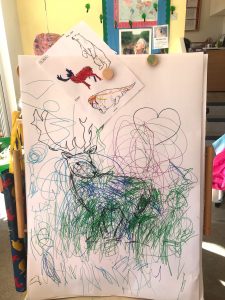