Australia had 75,000 speckled flying-foxes – or fruit bats as they’re also called – before the most recent heat wave in November 2018, where temperatures surpassed 42C in Cairns, wiping out one-third of the population. As the biggest bats in the world with a wing span of up to 1.7m, these sweet and intriguing looking mammals are well worth some consideration.

Bats carry diseases that can be harmful to humans, but they also play a vital role in keeping our ecosystems in good health, not just in Australia, but all over the world. Fruit bats ensure the survival of threatened rainforests such as the Wet Tropics and Gondwana Rainforests, in Queensland, Australia, as they pollinate flowers and disperse seeds whilst foraging on the nectar and pollen of plants, as well as fruits.

Arriving in class one little boy ran up to me to show me his batman T-shirt – how funny I thought, prefect timing. The children loved colouring in and learning about bats and why they need our help at the moment, but what I enjoyed most was how one little girl drew stars in the sky as bats come out at night! I congratulated her on this and explained that most, but not all come out at night time.

Another native of Australia, the koala bear, had a population of 10 million at the turn of the century before European settlement, now there are only 43,000 left. Although they’re not technically classed as an endangered yet, they’re under huge threat as 80% of koala habitat has been lost to human homes, drought and forest fires over the last hundred years.

I asked the kids why we were thinking about koalas bears and one little boy told me that people are cutting down their trees, and they should only cut down trees when there are no animals in the forest. It was a very good point and I responded by saying that being thoughtful about which forests they cut down, and where, is exactly what should be done. Avoiding cutting down eucalyptus forests would certainly help because that’s where koalas they live.

It was such a good morning and one of the most fun workshops we’ve done together, but I must admit there was quite a lot of chat about bat poo…For more info please visit www.doodleswithmydaughter.co.uk 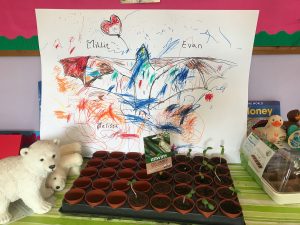 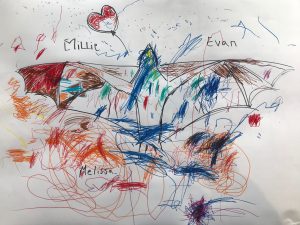 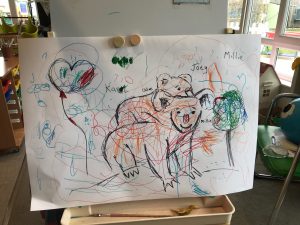