The revered naturalist and pioneer in conservation, Sir David Attenborough, has inspired millions by bringing nature into our homes with his desire to explore and enlighten us on the beauty of the natural world. To celebrate his 93rd Birthday on Wednesday 8th May, as well as marking Plastic Free Day in schools, my Wednesday workshop focussed on the effects of plastic pollution.

Arriving at the nursery, the teachers had, in preparation, already found a huge picture of David on a big computer screen so that when I asked the children whose birthday it was they shouted, ‘David Attenborough!’ Excellent, we were on a roll.

Found between Hawaii and California in the North Pacific, the Great Pacific Garbage Patch is the largest accumulation of floating ocean plastic in the world and has been described as the same size as France, or Texas if you’re American. Recently it’s been estimated that 46 percent of the rubbish found in the patch is from discarded plastic fishing nets.

Considering that 90 percent of all sea birds have plastic in their guts, the children began by colouring in and learning about the albatross; the bird which has the largest wingspan – up to 3.5 metres – and which can glide through the air for vast distances without using their muscles. They can also dive down to five metres to catch squid and other fish, providing that’s what they find and not floating plastic or ghost nets; discarded or accidentally lost netting that drifts through the ocean entangling whales, turtles and other sea life.

‘The colourful plastic tricks the birds so that they think it’s food to take back to their babies, but really it makes them sick and then they die,’ one little boy declared whilst we were drawing together; he was marking the lines of a net that was covering the diving albatross I’d sketched on the board. ‘Unfortunately, that’s true,’ I confirmed. ‘The same thing happens with seals,’ I added, another animal we were looking into.

There was a lovely buzz in the nursery that day and the children were very enthusiastic to learn about how we can help marine life. As I waved goodbye, a little boy ran to the recycling bin and shouted to me, ‘this is where plastic goes.’ ‘Indeed, it is,’ I said, ‘and where possible, buying food and other things that aren’t covered in plastic would be a good thing to do too.’ For more information please visit www.doodleswithmydaughter.co.uk 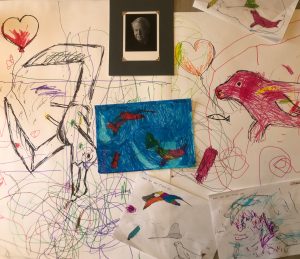