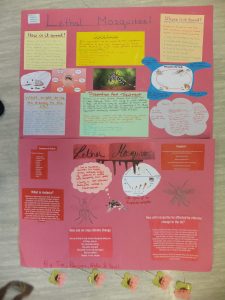 The world’s deadliest animal is not what students at St Mary’s Ascot expected. According to a study supported and published by Bill Gates, approximately 6 lives per year are claimed by sharks, 60,000 people lose their lives due to snake bites, 580,000 humans are killed by other humans and 830,000 people are killed by mosquitoes which suck blood and transmit viruses from one person to another. Mosquitoes are truly deadly.

The ‘Treating & Preventing Malaria’ leaflet provided by the Roots & Shoots Waterworld Activity program inspired the activity, which a group of students in year 7 at St Mary’s Ascot school carried out.

As yet there is no vaccine to combat the disease. Mosquitoes easily adapt to new environments and selection pressures and are able to breed and reproduce in even small drops of water.

Students found out that the UK might become a habitat for mosquitoes as global warming is expected to expand the area that mosquitoes thrive in. This threat is increased by the rising water levels and the flooding of low-lying areas, providing more water for mosquitoes to lay their eggs.

To understand the link between malaria and warmer weather, students were motivated to think about pledges they can make to reduce the emission of greenhouse gases.