Palm oil and the detrimental effects palm oil plantations are having on forests around the world including Indonesia, Malaysia, South America and Africa, but most importantly; how these plantations are impacting climate change, along with the animals that live in those forests, is quite a hefty subject and one that’s very complicated.

Palm oil is cheaper than all other vegetable oils and is so versatile that it’s used in everything from shampoos and soaps, to crisps and biscuits – it’s used as a natural preservative in processed foods; two thirds of palm oil production goes into food – as well as things like biofuels.

Natural forests in tropical areas are burned down so that oil palm trees can be planted to grow oil palm fruit. Forests destroyed for oil palm are among the most carbon-rich in the world. When they’re burned, the CO2 they’ve absorbed – the leading cause of global warming – is released into the atmosphere contributing to climate change by massively heating up those parts of the world.

More than 50% of global demand for palm oil comes from Asia; Europe and America account for less than 14% but it’s still prevalent in most processed foods here and in the US. Palm oil is Indonesia’s top export and accounts for 13% of Malaysia’s gross national income, so the industry in SE Asia as well as Latin America and Africa has lifted more people out of poverty than anything else, but at a devastating cost to the environment, which is why I wanted the children to start thinking about this in a fun and gentle way, of course.

Orangutans have declined 50% in the last 60 years and are now critically endangered. As one of our closest relatives, we share nearly 97% DNA with “orang hutan“ which literally means “human of the forest“ in Malay. They are awesome primates with a great howl that can be heard for miles and beautiful orange fur, along with human-like features.

Sketching big orangutans on the board with the children was such fun and they enjoyed making their own marks, but some of the boys went a little crazy that afternoon creating some busy and beautiful pictures, but I wasn’t entirely sure how much they were listening…

At the end of the workshop after I’d left the classroom, I bumped into a mother who’d just collected her son and we stopped to chat. I asked her son what we’d been learning about and he pondered for a moment and said, ‘orangutans.’ ‘Yes, we were. Why?’ I questioned. ‘They’re endangered,’ he responded. ‘Can you tell mummy why that is?’ I asked. He thought for minute and exclaimed, ‘palm oil!’ I smiled and replied, ‘Aha, so you were paying attention!’

As the little boy walked away holding his mother’s hand, she turned around, gave me a wonderful smile and thanked me. This workshop just reaffirmed that children really do learn through play. The little ones had covered a very current issue successfully so I am grateful to Mad Hatters for being part of that.  For more info please visit www.doodleswithmydaughter.co.uk 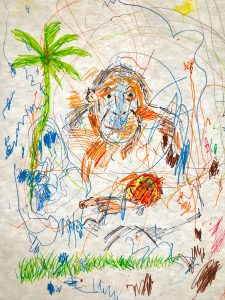 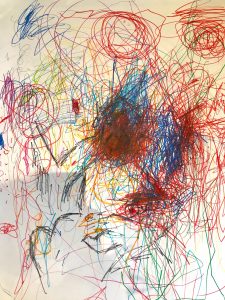 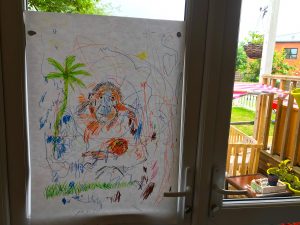