I wrote to lots of different companies and shops around Dorset asking if they would be able to donate anything to my raffle, and I gave then all some information about The Roots and Shoots programme.  I had an amazing response to my letters and received lots and lots of prizes. The sorts of prizes I was donated were meal vouchers, handbags, steam train vouchers, Lego, and so so many more.  I received about 40 different prize and split these into two categories one for children and the other for adults and sold loads of tickets.  I mainly sold the tickets at my school but my family and friends outside of school also bought tickets too.

I drew the raffle in my school assembly, and this was so rewarding after my hard work.  I raised a total of £413 from my raffle.  From this I donated £100 to my school to start a wildlife pond, which will be part of the schools Roots and Shoots programme. The rest of the money has gone directly to support Roots and Shoots in all the amazing work they do to help us as young children look after the world we live in now and for our future.

Thank you so much Sophie!! the Roots & Shoots Team 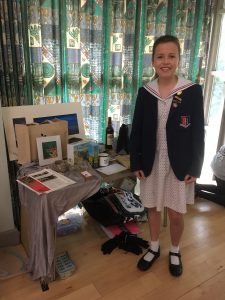