Last week the children and I were celebrating giraffes for World Giraffe Day on 21st June, along with their black and white stripy friends, grevy’s zebras. These two species are often found side by side in the African savanna where giraffes are known as ‘browsers’ because they eat the leaves from trees and bushes, whilst zebras are termed ‘grazers’ and munch on grass.

As the tallest land mammal on earth, giraffes can run up to 34mph, but did you know that their numbers are dwindling resulting from poaching and habitat loss caused by human population growth? We’ve lost thirty percent of giraffes in the last thirty years leaving only 111,000 left in Africa, and over fifty percent of grevy’s zebras in the same time frame so that now there are only 2,000 left in the wild.

There are three types of zebras; plains, mountain and grevy’s but it was the largest – the grevy’s zebra – that we were looking into as they’re highly endangered as a result of land degradation caused by the overgrazing of livestock; they also have to compete with the livestock for water supply. Hunting and habitat loss play big roles in the threat to grevy’s zebra populations as well.

The children loved drawing and learning about giraffes but as we’d run out of white paper, we were sketching on yellow sugar paper. This was great and in keeping with the colour of giraffes, but not so good for zebras! On the subject of endangered species, one little boy shouted out, ‘it’s like the ice melting and falling into the sea which means that the polar bears are dying.’ This remarkable comment allowed us to recap on previous workshops we’d covered on global warming and relate it to the conservation of the beautiful animals in question.

The connections the children continue to make between our workshops is brilliant and shows just how much information they’re enjoying taking in, and retaining, about our wonderful world.  For more information, please visit www.doodleswithmydaughter.co.uk 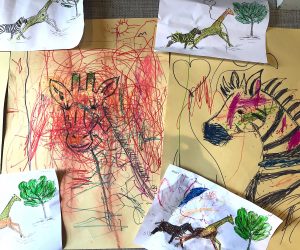