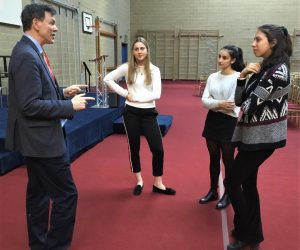 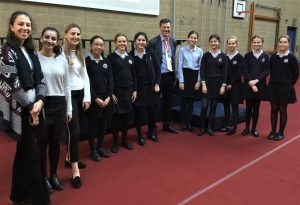 Professor Hugh Montgomery is consultant Intensivist at the Whittington Hospital in North London and Professor of Intensive Care Medicine at UCL, where he directs the Institute for Human Health and Performance. He was appointed London Leader by the London Sustainable Development Commission for his work in Climate Change and Health.

Professor Montgomery’s lecture started by pointing out the worldwide increase of Gross Domestic Product (GDP) over the last 200 years. The total value of products manufactured in 2010 was 31 times larger than in 1800. He explained that the production of goods and the feeding of an increasing population put pressure on natural resources.

The disappearance of fish in the ocean, loss of fertile topsoil and the draining of freshwater basins are a threat for the survival of people and animal species. Professor Montgomery illustrated this problem by showing several lakes with beached cargo ships and desert like scenery. For example, since the 1960s, Lake Chad has shrunk by 90% due to a mix of climate change, increasing population, overuse and irrigation.  Its basin covers parts of Nigeria, Niger, Chad and Cameroon, and has been a water source for between 20 million and 30 million people. But with the desert expanding further every year, it is getting increasingly difficult for families to make a living through agriculture, fishing and livestock farming.

He then stated that an increasing affluent population wants to eat meat. 75 McDonald’s hamburgers are sold each second. The production of beef is very resource-intensive and requires 15,000 litres of water per kilo of meat; to relate the two: the content of an Olympic-size swimming pool would only amount to 1,250 hamburgers.

Humans are using the land area of the whole size of the African continent for animal grazing. As empty land becomes scarce, forests are cut down. 130,000,000,000,000 m2 per year (the equivalent of 20 football pitches every minute) is the current rate. With this, the numbers of vertebrates are at an all-time low. 72% of all birds on the planet are farmed poultry. ‘We are in an era of mass extinction’ says Professor Montgomery, ‘Between 150 and 200 species become extinct every 24 hours’.

On top of these impacts are those of climate change. Professor Montgomery compared today’s figures of some commercial goods with figures from the past. In 1879 the light bulb was invented; today 126 light bulbs are sold every second. In 1910 there were 8000 licensed vehicles driven in the USA; today, 1.4 billion cars are on US roads. The first commercial jet tickets were made available for the very wealthy in 1950; today, 130 passengers board a plane every second. The first smartphones came out in 2000; today, there are 8 billion mobile phones registered. The number of mobile phones exceeded the number of people living in 2017. Goods need natural resources in order to be made and many run on electricity produced from burning fossil fuels. Last year 245,031 kg of coal, 7,147,804 litres of oil and 116,387,620 litres of natural gas were burned … A SECOND!

The Earth’s atmosphere is gaining heat energy which is equivalent to 5 nuclear Hiroshima bombs per second to power people’s needs. “Climate change is the greatest global health threat of the 21st century”. Increased temperatures will boost the rate at which pathogenic bacteria grow, there will be more oceanic and river algae blooms and far more aeroallergens that cause asthma. Vector-borne diseases such as malaria or dengue fever will spread as warmer temperatures means faster breeding rates for parasites.

While inhabitants of some countries believe they would enjoy warmer temperatures, in other countries labour productivity has dropped due to heatwave exposure and weather related disasters. To avoid starvation, mass migration is causing political tension with resulting conflicts between nations. ‘Melting glaciers in the Himalayas are wreaking havoc in Bangladesh leading to a rise in illegal migration to India. This has prompted India to build an immense border fence in an attempt to block newcomers.’

Within the lifetime of students in the audience, Professor Montgomery believes that the Earth’s temperature will rise by 4 oC. While Professor Montgomery never deviated from his bleak outlook, he congratulated the young audience on their desire to tidy up the mess caused by past generations. He encouraged students to think about their diets, the use of single-use plastics, their means and frequency of travelling, and the origin of the electricity they use to power their electronic equipment.