Through the early morning mist at this time of year, you’d be hard pushed not to see a glistening spider’s web somewhere near your front or back door as you leave your house for your day’s adventures, and even in the cities our little eight legged friends are always hiding somewhere. To be quite frank, I’m not really their biggest fan, but spiders are extremely beneficial to our general ecosystems both inside and outdoors because of their necessary help in controlling levels of pest insects; they’re thought to be the most important terrestrial predators eating tons of insects annually. In fact, the world’s spider population consumes the same weight of insects as the weight of fish and meat consumed by the human population every year. That’s around 400 million metric tonnes (gardening.which.co.uk). Staggering isn’t it.

There are 45,000 spider species worldwide and they’re all predators of insects. We have 600 species in the UK, half of which are money spiders. All make silk which they use to create spider webs and capture prey, but not all spin webs, not big noticeable ones anyway, so there are plenty of other spiders present even when you can’t see any webs.

Considering that Halloween had only just passed, I wanted to focus a workshop on spiders so that the children could see how integral they are to nature and not be frightened of them. Funnily enough, Zoo Lab had visited earlier this month so the kids had had a chance to look at a real life tarantula close up so were super keen to draw some arachnids with me. I sketched away at the board feeling slightly itchy each time I drew a leg, but hid it well and the kids loved looking at pictures of money spiders and orb-web weavers including the ubiquitous garden spider, whilst learning spider facts and why we must not harm, but appreciate them.

After I left I was told that the kids had been watching spiders in the bug hotel later that day and reminding each other of how wonderful these creepy crawlies are. This workshop had been successful with the children and a personal test for me, for which I feel I passed and now have a new found respect for our eight legged friends…For more information visit www.doodleswithmydaughter.co.uk 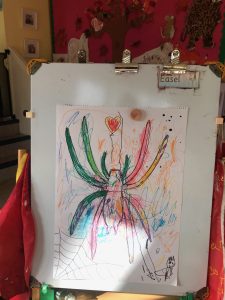