Damers First School was crowned Surfers Against Sewage Plastic Free Schools’ Champion in a glitzy awards ceremony at Bristol Museum and Art Gallery last week. The awards ceremony was hosted by BBC One Show Presenter, Chair of Judges and SAS trustee Lucy Siegle. The awards celebrated the work of young people, national organisations and individuals  in reducing single use plastic. Sir David Attenborough was presented with the Sir Malcom Walker Award for the biggest influencer on plastics. The Producer of Blue Planet 2 collected the award on his behalf.

The judges applauded Damers First School for embedding sustainability work across the school curriculum as well as the children going to Westminster to meet Michael Gove to discuss the importance of an ‘all in’ system for the Deposit Recycle Scheme with support from CPRE and Litter Free Dorset with the children appearing on CBBC Newsround.

Each limited edition award was  hand made from recycled glass in the shape of a plastic bottle, by Kurt Jackson, sculpture artist who was born in Blandford and now lives in Cornwall. 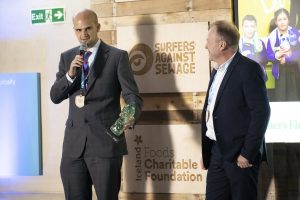 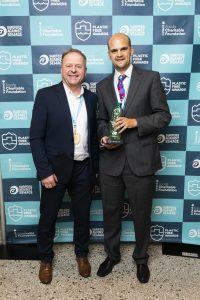