As we move towards the winter months, things are slowing down: plants are dying back and many creatures are thinking about hibernating. We, however, are still busy! We have been cutting back our wild meadow area, clearing out fallen leaves from our wildlife pond, staking our growing saplings and cutting back overgrown trees and bushes. We also now need to think about putting out food for the birds that choose to stay in the country for Winter, and of course, we can use all our newly erected bid feeding stations for that.

Because we are still so busy and seem to be doing more and more, we thought we should start up a group of enthusiastic, motivated pupils who would take the lead on all things linked to our outside space and the environment in general. We decided to call the group, the Roots & Shoots Eco Group because since being part of Roots & Shoots, we have been inspired so much and understand even more how important every little we all choose to do helps our world.  Once we all got together, we soon realised that we could do a lot more things than we already do, to help the environment as a whole. We already collect unused drinking water at the end of every day and use it to water our plants, collect fruit & veg, shredded paper and leaves for composting each week, litter pick in and around our school, encourage cycling or walking to school instead of using a car, and have paper recycling bins in all classrooms to use every day.

We decided we wanted to go ‘bigger’ and after some research found a gentleman called ‘The Iron Man’ who had a very interesting project – he was collecting used crisp packets and turning them into survival blankets for people sleeping on the streets. He understood the difficulties the homeless experienced, especially through the cold winter months, because he used to be homeless himself.

We thought this would be an amazing project to be part of because not only would we be using crisp packets that are notoriously difficult to breakdown if discarded and are a hazard to wildlife, but we would be helping homeless people stay warm. We are very excited to be part of this project, and the crisp packet collecting has begun! 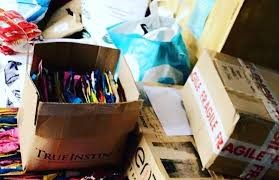 Hopefully, if we are really successful, we will start making blankets ourselves and hand them out to the local homeless people around Ashford struggling with the cold.

We will keep you posted on all we achieve!