Our peace and quiet was shattered today by the sounds of protest echoing around our school. Year 3 had been learning about how wonderful our planet’s rainforests are. By the end of the lesson they understood that rainforests were not only home to many indigenous people, but contain over 30 million species of plants and animals. That’s half of the Earth’s wildlife and at least two-thirds of its plant species. They also learnt how important the forests were to us, even though we live thousands of miles away; keeping our planet healthy by absorbing carbon dioxide and stabilizing the world’s climate, a source of medicine and food, maintaining the planet’s water cycle and so much more.

The children then went on to learn about the destruction of these beautiful habitats as forests are cut down to make way for vast plantations where products such as bananas, palm oil, pineapple, sugar cane, tea and coffee are grown. Also for cattle ranching, when the soil will not sustain crops for long, and after a few years the farmers just cut down more rainforest for new plantations. The children were very upset by this so decided to produce their own poster and hold a spontaneous protest march around the school.

The corridors and playground rang out with the loud shouts from the children as they waved their banners and posters, drawing everyone’s attention to the plight of this amazing habitat.  Everyone stopped what they were doing to ask the children what was happening and they were all very eager to share their findings. It was a very moving and passionate end to our day!

Well done Year 3 for sharing their views with us all! 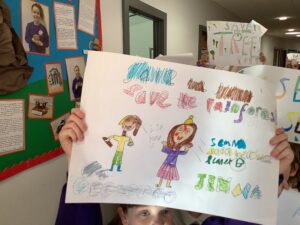 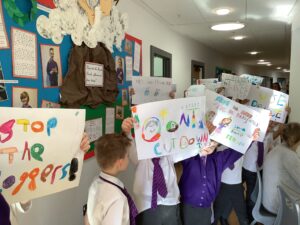 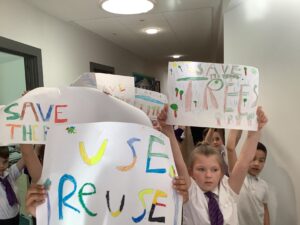