Damers First School brings plastic waste fight to the heart of power on trip to Parliament.

After learning about the role of MPs and why talking to your MP is important, the pupils created a plastic themed collage to give to their representatives then set to work lobbying their MP for more action on plastic waste in a face to face meeting in Parliament. The pupils joined students from nine other schools from across the country who travelled to London to raise the alarm to their MPs on the UKs plastic waste problem.

The trip to parliament came after pupils took part in The Big Plastic Count, a citizen science project launched by Greenpeace UK and non-profit organisation Everyday Plastic held between the 16th and 22nd of May this year. The count saw over 100,000 households, schools, community groups and businesses across the UK count their plastic packaging waste, record the different types they throw away and enter their results into the campaign website. The campaign aims to convince the government to take more action to cut plastic production, ban plastic waste exports and transition to refill and reuse alternatives which are affordable, accessible and appropriate for all. 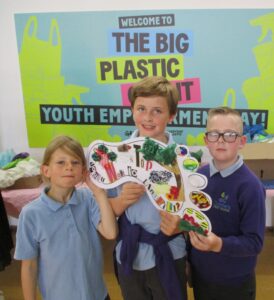